The time has come…..

Posted on June 27, 2018 by topofthesouthmototrialsnews

Its with great sadness that I have finally decided to give up the sport I have growing to like so much over the years due to my on going back injury. This has not been a quick decision and has been decided over the last few months. I have only ridden the once since the NZ Champs in October for about a hour and the pain is just to much to continue. I would like to say Thanks for all the support and wish everyone all the best in the sport of Trials. Its time for me to put more time back into my supportive wife (Debbie) and my boys chosen sports as they have done to me over the years.  I have meet some outstanding people over the years through trials and I have many great memorizes to look back on.

Posted on April 27, 2018 by topofthesouthmototrialsnews

Some photos from Neil at Ixion MCC

Posted on December 15, 2017 by topofthesouthmototrialsnews

I thought l would let you all know how the New Zealand champs went and a bit of my trials history. It’s been over seven weeks now since the champs and it still feels awesome to finally get my childhood dream of being NZ Moto Trials Champion. It was something l had always strived to do when l was starting out in trials at the age of 13 years old, riding my first trials bike a ty 175 it was always a goal of mine. Didn’t think back then it would come at the age of 40 years old tho. I started competing in trials in 1993 winning clubman grade and worked my way up the grades winning intermediate in 1996 & A grade class in 1997. I then had some time away from the sport to return in 2001 competing in A grade class again and moving up to the top Expert class, competing in my first NZ champs in 2003. I managed to win the NZ expert day trial which was run on the first day of the three. I finished overall for the championship in 3rd place. Then came our twin boys in 2004 so this was when l had another break from the sport and didn’t return to the expert class till 2008. This was just after we had returned from Italy supporting Jake Whitaker in the youth world championship where he finished 10th in the world in the youth class. I competed in Expert class right though till 2014 finishing in the top 2/3 over those years. 2014 was going to be my last NZ championship in expert class due to a lower back-injury l had suffered and its called a paracentral annular tear in my L5/S1 and L2/3.  l was advised to give up trials from a back specialist. I also thought that maybe l had gone as far as l could in the sport and the drive and fun was not the same any more. I still was involved in the sport with training days and I competed in the SSDT in 2015/16 but that was it. This brings us up to 2017 where l still have the same back problem from 2014 but l had a good friend ring me about six weeks out from the champs to tell me that l should give the champs one more crack. I took a few days to think about it and thought why not give it one last shot. So, the next six weeks was spent on getting bike fit again riding the bike three times a week. Going from not riding at all to three times a week bought on another injury in golfers elbow and l don’t even play golf. So, it was physio twice a week as well. Big thanks to Kapiti beta for the fresh up of my 2011 beta. It felt like new when l got it back and l was feeling good leading into the labour weekend. 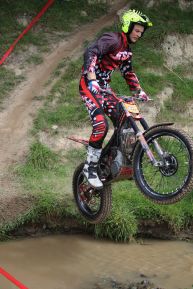 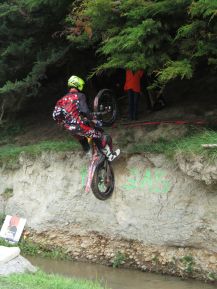 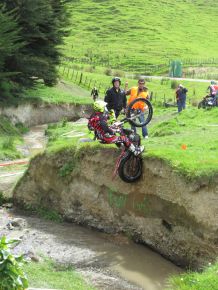 Myself and Debbie (my #1 supporter) headed north for the champs. Day one and I’m not going lie the nerves were definitely there till the first section was out of the way and then l could relax a bit more. Day one was well set out as they did have a lot of rain the weeks leading up to the weekend. Was a nice fine day with some talk maybe some rain in the afternoon, so everyone was pushing to complete the three laps of 10 sections before any rain came. No rain came on the day but it did bucket down later that night. I was pretty happy with my riding on day one and the sections rode quite easy so there were no room for error. My first lap was going pretty well till section 9 where we had a decent size 3m bank. I didn’t give it enough and came back down from the bank jarring my back. I was looking forward to getting into my second lap as l ride better when l keep warm. Was sitting in second after first lap so l had some catching up to do. My laps for the day were 9,3 & 2 with a total of 14 and enough to take the win. Matt Foster was riding well and came second on 21 for the day.

I was on pain relief for the weekend for my back and it wasn’t till later that night l realised l had done some new damage to my lower back from coming back of that bank. But nothing was going to stop me to finish off the weekend.

Day two and it was in the Maungakotuks, you either love the terrain or hate it and l love this place. Ridden there a few times over the years and this was probably my favourite day of the three days. This day was very well set out with some really tasty sections in there and the overall night rain made the sections even more of a challenge. My first lap was pretty solid but still second place after first lap. Today we had 4 laps of 10 sections and l really enjoy terrain like this with slippery rocks, tree roots and banks because it keeps you honest. Happy with my riding over the day apart from a silly five on an easy section on my last lap. My laps on the day were 18, 8, 8 & 14 with a total of 48 and the win. This was also the NZ expert day trial. Jules Huguenin was in second place and very consistent on the day with having four laps of 15 with a total of 60.

Day 3 was also in the Maungakotuks and yesterday and today’s sections l enjoyed the most. Sections that take points without having to have every section massive. There’s nothing wrong with a big section in expert as long as it’s rideable. There was nothing over the weekend that l wasn’t happy to ride. Day 3 was John Lawtons day and he knows how to set a trial. There were no sneaky lines to make the sections easier what l could see which always means there has been a lot of thought put into them. The nerves were back on last day at the start because all I’m thinking is l want to finish the day with no problems. Very happy with my last day riding and once l got going l really enjoyed the day as well. My laps on the day were 14, 16 ,10 & 11 with a total of 51. Matt Foster came home in second place on 70 points & Stu Lawton in 3rd place on the last day.

Riding back to pits after section 10 and knowing l was now the 2017 Champion was the best feeling ever and seeing Debbie at the van who looked as happy as l did. Matt Foster took out second overall and he really impressed me with his riding over the three days. Jules Huguenin 3rd place and Stu Lawton in 4th. All the expert riders kept me on my toes and it was good three days spent riding alongside them having a laugh and catching for each other if needed.

This year’s event was run very smooth and the friendly feel in the pits and during the days really topped off the long weekend. One of the best NZ champs I’ve seen and being apart of for a while. Massive Thanks to Ixion Club and their organisers, Observers, Ravo from Trials scores. All the kind words l received over weekend from competitors that was very kind. Thanks to Blake Fox for giving me a hand and was good to see you back on a bike. Debbie for her help in the pits and support. John at Kapiti Motorcycles for his ongoing support and over the weekend.

All that was left was off to prize giving and l knew it was going to be hard for me to speak as it means so much to me, and yes I could hardly get a word out. I am absolutely honoured to now have my name on the NZ expert trophy next to some of the real legends of the sport like Stefan Merriman, Andrew Poad, Warren Laugensen and Jake Whitaker but the one name that is most important to myself is James Lawtons name, who was my idol when l was a young lad in the sport and I thought he was The Man!.

It’s being seven weeks now since the champs and even though I’m still over the moon with the result l haven’t touched a trials bike since the last section on day three because I have done more damage to my back. It’s a bit frustrating because now more than ever l just want to ride but I need to try and get my back sorted if l am ever going to come back & compete again. Thanks to all that have helped me over all my years in the sport.